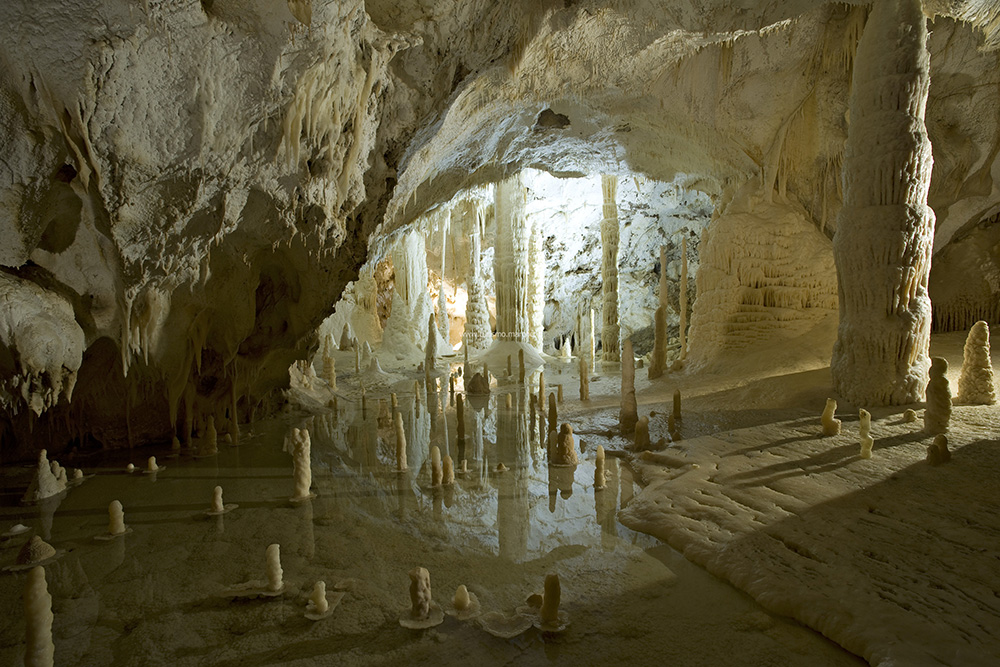 From the Frasassi Caves to San Severino

The Frasassi Caves (Municipality of Genga, about 90 km from the campsite) are one of the most famous complexes of public caves in Europe. The caves can be easily visited on foot in a walk of about an hour. The first cave, the Abyss Ancona, is large enough to contain the Cathedral of Milan. At 1 km from the entrance of the caves, we suggest the visit to the Temple of Valadier, reached by an easy path.

The caves are included in the Regional Park of Gole della Rossa, which includes a very interesting fauna: among birds, noteworth are the Golden Eagle, the Goshawk, the Lanner Falcon, the Peregrine and the Eagle Owl; among mammals, the presence of the wolf is standing. The numerous underground cavities host large colonies of bats. Not far from the caves lies the town of Fabriano, famous for the production of paper. The Museum of Paper and Watermarks is a small gem that preserves the history of paper and of its production tools of the different ages. You can watch the masters papermakers at work and you can try to create your own sheet of paper!

On the way back to the camping, we suggest you take the slower but scenic road to San Severino. This municipality has a remarkable artistic heritage: the Borgo features a big square, Piazza del Popolo, unusually spindle-shaped, and the nearby newer Duomo; on the top of Monte Nero you can find the Castle and the elder Duomo.

At 25 km from San Severino, lost and perched on a rocky spur, appears the small village of Elcito. Almost uninhabited, it is a well-preserved gem that offers breathtaking views. In June it hosts the “Palio dei Castelli”, a medieval festival, while in December the country turns into a living nativity scene.

At 4 km from Elcito you can reach the beech forest of Canfaito: an ancient forest of beech trees on a plateau at the foot of Mount San Vicino. In autumn, when the wood is tinged with yellow, it is a paradise for those who love photography.