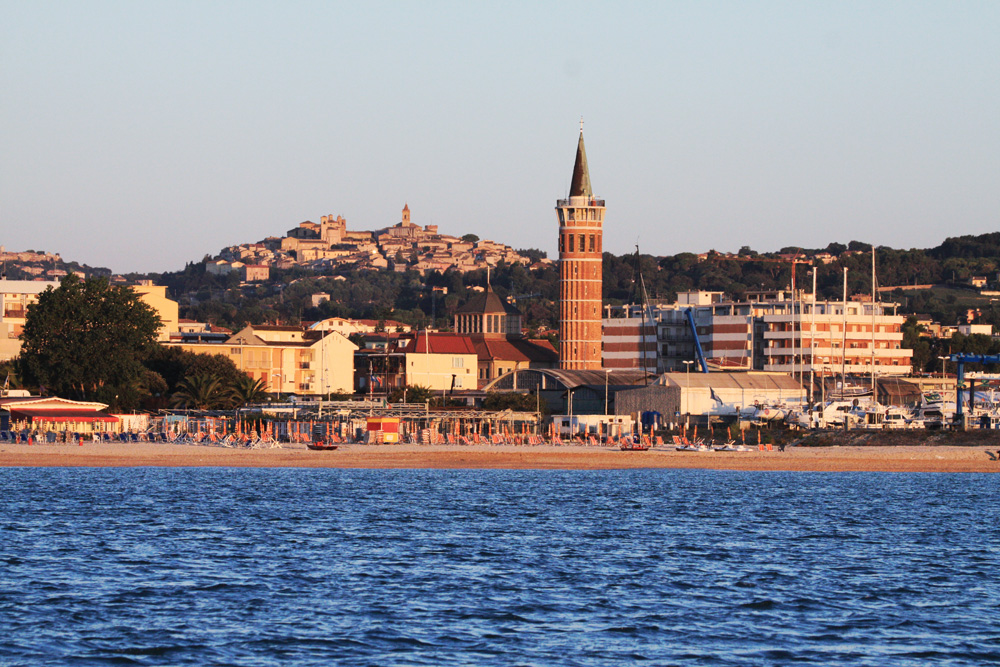 Civitanova Marche and its surrounding area

Civitanova Marche and surrounding area have a lot to offer to calm tourists. Quiet beaches, cultivated hills, delicious food, and lots of little churces and villages: take your time to explore it!

Our camping sits on the top of the Belvedere hill, which stands halfway between the two centres that make up the city of Civitanova Marche: the upper town, medieval, and the port, developed at the mouth of the Chienti river in the last century from a primitive group of fishermen’s cottages.

Civitanova Alta, enclosed by 15th century walls on a hill at 3 km from the sea, is a typical village of the Picenum (the ancient name of the area), with alleys, towers and brick churches. The theater Annibal Caro, at a short walk from the main square, is a jewel of the 19th century. In the countryside near the town stands Villa Conti, a beautiful mansion in art nouveau style.

The modern centre of Civitanova Marche revolves around the harbor and the ample Piazza XX Settembre, bordered by public gardens and the Sforza Palace. A noteworthy modern building is the city library, designed by the rationalist architect Adalberto Libera. The waterfront of the city, divided in half from the port, is characterized at the north by a golden sandy beach and shallow waters, ideal for children; and southwards by a mixture of sand and gravel, with deeper water. Going up the valley of the Chienti river, about 5 km away, it is the church of Santa Maria a Pie’ di Chienti, built in the 9th century, with three naves and galleries. The next stop along the way to Macerata is another remarkable Romanesque parish church: San Claudio al Chienti, characterized by unusual cylindrical towers.
Later on, the route climbs the hill of Macerata. Antique university location, the city boasts the outdoor theater with the best acoustics in Italy. Originally designed for competitions of the ancient sport “pallone con bracciale”, it is now home to the Sferisterio Opera Festival, which takes place every summer in July and August.

Returning downhill, we meet the complex of the Abbey of St. Mary of Chiaravalle di Fiastra, one of the best preserved examples of Cistercian architecture in Italy, surrounded by the peaceful countryside of the valley of Fiastra. For those who love nature, we suggest the visit to the adjacent nature reserve, with interesting environments such as the pond and the ancient wood (“Selva”). Possibility of organized excursions, also horseback: la Meridiana.

The majestic Rancia Castle, not far from the abbey, was built in 1397 by order of Rodolfo Varano on the model of fortified Cistercian farms. It was the scene of many battles, the most famous of which is the first battle for the independence of Italy (1815) between the army of Joachim Murat, King of Naples, and the Austrian army.

Near the modern Urbisaglia, we can find the ruins of the Roman city of Urbs Salvia, founded in the 2nd century. The archaeological park is among the most interesting in the region; you can visit the Cistern, the Theatre, the Amphitheatre, the Cryptoporticus, and other buildings.

An equally interesting archaeological site is Helvia Recina, not far from Macerata and founded in the 2nd century. The best preserved building is the ancient theater.